Hi all, I have previously set up some sound sets for my different campaigns, but when logging in to Syrinscape (on my computer) today I find that all of the sound sets for each campaign are no longer in the order I placed them in. And it does not seem like I can fix this order from here at the website using the Your Campaigns page. Am I doing something wrong that has caused this? Its kinda hard to run a campaign when all the sound sets are all out of order and scattered about.

You definitely should be able to re-order SoundSets within A Campaign… @sonofconan could you check this out? Have you tried a different browser? Different device?

Reordering of actual Campaigns is still something that is waiting to pop to the top of the priority list and get fixed.

I just logged into the Syrinscape program from both my computer and my Galaxy tablet. Both show the order of the sound sets in each campaign to be mixed up and random. But when I go to the website (here) to look at the order of the sound sets, they are just the way I want them. I tried to move them around here on the website, and I can, but those changes do not reflect in the Syrinscape player on either my computer or tablet.

I have the same issue: Chrome browser, Ipad tablet. Thanks for looking into it.

Website has everything nice and neat soundset-wise in each campaign.
App on computer and App on phone appear randomly jumbled inside campaign.
Note: They are jumbled in the same order in the campaign on both Apps.
I would like to reorder the campaigns as well, but i hear that is a to-plan-for further down the checklist, so I can hold off on that one.

Hi there again,
I am checking back in to see if there has been any advancement on correcting this issue. It seems I am not the only one experiencing it, but it may just be a handful of people(?). To date, I am still unable to have the rearranged sound sets from your website translate over to Syrinscape Fantasy Player on my computer and my Galaxy tablet. Not sure if it matters, but I use Google Chrome on my computer to visit your website, where I make attempts to rearrange the sound sets in my campaigns.

Any help or guidance is appreciated.

Rearranging SoundSets within Campaigns does work and should flow through to the Fantasy Player each time it does a reload (give it 10 minutes to make sure and/or trigger a reload under settings).

Rearranging the order of Campaigns is something we have still yet to get to on the dev list.

I played around with the Fantasy Player again tonight to see if I could make this work, and here is my tale:

Next I decided to delete all 16 sound sets from the Awaroth Woods campaign and start fresh. Within about 2 minutes I saw the sound sets begin to disappear from the Fantasy Player campaign list! But even though the website showed I had deleted all 16 sound sets, my Fantasy Player still showed 4 were still in the campaign. These four were Giant Spider Battle, RSAC9 The Black Marshes, EOA Dead Warrens, and Lair of the Siren. Waiting 10 minutes and clicking the Reload button had no effect.

I then decided to delete the Awaroth Woods campaign from the website all together. After about 3 minutes, it was gone from the Fantasy Player.

I then started anew, recreating the Awaroth Woods campaign on the website, and started by adding in the four class sound sets (Fighter, Rogue, Wizard, and Cleric), and even was able to rearrange them once. I then added 4 more soundsets, and the issue began all over again. No matter what I do, I cannot rearrange the 8 soundsets in this campaign (that is, how I rearrange them on the website is not reflected at all on the Fantasy Player).

Could my Google Chrome be blocking the website information from reaching my Fantasy Player?

I will try to attach to images to show you what I am seeing.

Any help resolving this matter is appreciated. 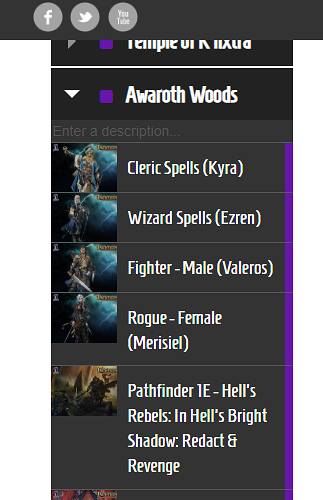 Added Mad Mage to the campaign. Put them in numerical order in “my campaigns” took about 2 minutes for my player to register, The new ones were at the top in 987-431-256 order. What am I missing?

There seems to be something behind the scenes that is affecting the order, something that is coded into each individual sound set. I believe the Giant Spider Battle was one that always went to the top of any campaign I had it placed in, so that would lead me to believe there might be data within the individual sound sets that are coded as numerical, and that is why they defy our efforts to rearrange them. Well, that’s my uneducated guess.

I am able to rearrange Campaigns and Soundsets on the Web-page, but the change does not survive a reload of the page. To me it seems, that changes in the order are not correctly persisted in whatever database.

Same issue as the others. Prior to adding Soundsets from other players to the Fantasy Player (ie., using Campaigns), everything was in alphabetical order.

I’m trying to make an “Everything” campaign, that has every Soundset I have access to, all accessible through my Fantasy Player.

For me, the ideal would be an alphabetical sort within the Fantasy Player, with access to all my content regardless of which player it would default to.

Actually yes, I think one our recent updates has broken this.

I’ll make a ticket for dev to look at this!

And THANKS for your patience!