Do I understand correctly that we can use commercial sources (like soundtracks, etc.) in our soundsets, as long as they’re private?

If the answer is “yes,” does the software automagically detect right-protected content and flag it as “private” or is it up to each user to give the correct attribution and private setting?

Everything you upload is (by default) ONLY visible to YOU.

There are NO automatic things that flag stuff or anything upon upload, getting the credits right is up to you.

But mainly, uploading content for you own personal use is similar to storing these same files on dropbox… only visible and usable to YOU (untill you share them).

Yes, Thank you do much for the quick response. I’ve watched many of the videos — you do a great job on these! — but thanks for sharing this link. I need to watch this one again.

One more question — we can do WAV files only? That’s unfortunate as my (rather large) library is in mp3. Any plans to support other file formats?

You CAN (in fact) upload mp3s (I’m pretty sure). Give it a go and check I’m not making that up.

THEN: if you really can, let me know where I said otherwise (probably one of the tutorial videos, right?) and I’ll put in a note to correct that.

I’ll try it! I think I actually saw the WAV mention in the FAQs. It would be nice to have a list of the file types supported.

Any way to get the quality of the uploaded music to be any better? it always sounds a bit muffled or tinny. i have set the element as music, and not sure what setting i maybe missing… but the quality is definitely less than the original file.

Make sure you’ve set the uploaded sample to NOT 3d (have to do that after upload). Let me know if you can’t work out how to make that happen.

I used Syrinscape for the first time in a game last night and I experienced much the same thing. The sound of a music file that I had uploaded sounded really bad — like it was been downsampled out the wazoo. Pretty distorted. I didn’t have time to mess with it in-session, but will be doing some tests today to see if I can figure out what’s going on. At first, I could get sounds to play reliably in the Online Player, so I downloaded the Mac Fantasy Player and that’s when I immediately, noticed the degraded sound quality.

On a more positive note, the user experience was for the most part really great. I was able to drift in and out of different scenes and transition them smoothly. That was a much better experience than the platform I was previously using. But the user interface on my Mac Mac Pro with Retina Display was so tiny, I could barely read the buttons and so forth. But managing the music in-session was really great.

I recommend watching it all, but Your answer starts a little after 7:09 through 7:38

Also explained in the video is the magic behind the curtain is not immediate so changes do take sometime and can be monitored in the interface.

Mac Fantasy Player - How big do you want it 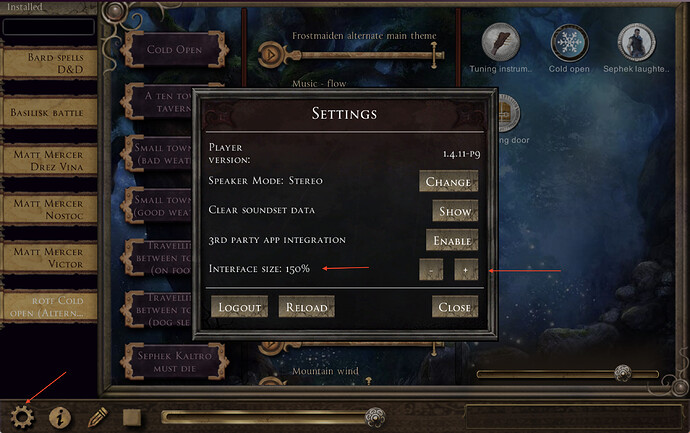 Thanks! The resolution I was having Saturday night mysteriously righted itself Sunday. But I’m glad to know about these controls. Will also check out the video you posted.