I’m building the BiA custom campaign. Is there anyone to help? 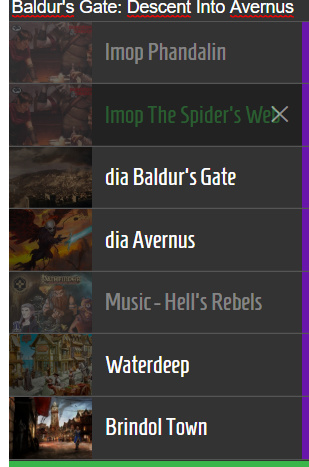 What sorts of sets are you looking for? What sounds do you need for that campaign?

What sorts of sets are you looking for? What sounds do you need for that campaign?

This is very hard to reply. There are dozens of places in DiA. I was hoping to have someone who also are working on DiA, so we could exchange knowledge.

But, if you can recommend something I would be grateful.

*infernal machines are like mad max vehicles, but in hell

Epic Battles with devils/demons - I like several of the Breaking the Bones of Hell sets - Soul Anchor, Apex of Bone, and Abandon All Hope. There’s also the soundset Hell, Hell Swarm, and Heroes of Undaren 3. On the disturbing side of things, Profany Bellery has several tense, disturbing battles.

Tension - Using the Elements - Horror battle allows you ratchet up tension levels with the click of a button. The set Music - Spooky also helps with tension-filled music.

For some very sad music, I would point out Shadows of Esteren - very sad and lovely.

For funny music, I like the music in Gnomeland Security, Tavern Brawl, and High Seas Battle.

For great revelations, may I recommend the Cthulhu Rises! set. That has 5 one-shots for epic hits, which would stunningly punctuate a great frightening revelation. Minotaur Maze has a “found treasure” one-shot for a happier, sillier discovery.

I hope that helps!

Thank you for your help.

Is there alternatives for the SCIFI sub suggestions? I have the Fantasy sub only.

Probably helps if I spell the thing right - it’s the “Profane Belfry” rather than bellery! And Heroes of Undarin rather than Undaren. So that’s my fault, sorry!

For mechanical sounds that are not in the sci-fi player, try Clockwork Entities combined with some sounds from Elements - Wind (for the rushing sensation of air from a speeding vehicle). Dream Quests II has a mood called “ceramic guardians” with several ceramic elements that have a clacking, mechanical sound that might also work. Perhaps add the “deep forge rumble” or “furnace fire” element from Elements - Fire to increase the rumbling effect of an engine.

For epic hits, like from the Cthulhu Rises! set, try When the Stars Go Dark I (which has some relevant one-shots), and Elements - Horror has the one-shots “anvil hit” and “horror hit” which also work for revelatory musical stings.

Thank you for everything!