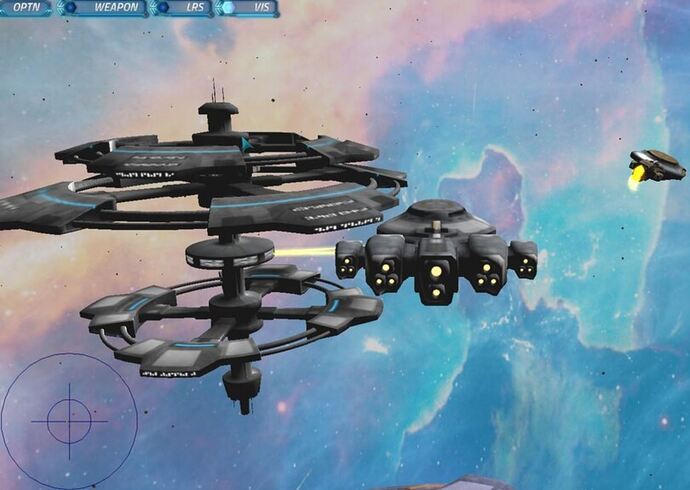 Managed to cobble together 5 Windows PCs on the weekend and played Artemis: Spaceship Bridge Simulator with the whole family. Two of the PCs are hilariously old, but still ran nicely (showing the console - but not the nice 3D render above).

The funniest moment came when the Laptop running the server blanked out (we had forgotten to plug it in - derp). The game actually managed to restart exactly where it was 3 minutes later when we got it running again… We declared it an AdBreak, which then became a running joke every time something went wrong or someone wanted to run and get food or the like!

The main thing we learnt = just how special the whole chain of command and organisation and calmness of leadership there is on the bridge of the enterprise = NOT on our bridge!

I saw this game first at Gen Con. If you’re a serious Star Trek fan then you may well have a serious amount of fun playing this game.

Has anyone else every played this? Are there ways of getting more story into the game? Has anyone played on a public server? Best hints?

This game was made by one guy, Thom Robertson, a veteran indie game developer.

I first heard about this sort of game when I borrowed a book from my local library back in the '70s or early '80s. It was called something like “Starship Simulator”, and it contained the entire pseudo code for a multi-position computer simulation. Rather nerdily I copied it by hand, but never got around to coding it up.

I love me some Artemis. At one point I figured out the speed of the ai ships, so we would pass the baddies by and when they would follow, we would arc around black holes. They would logically cut the distance, passing into the event horizon and die. Rinse and repeat.

passing into the event horizon and die

Most of the work was our team mates

If you want something a little bit more silly and informal, try Space Team !

Oo! I shall have to check that out!

I remember playing Artemis so many years ago. Are they still working on it? I wonder how many improvements they’ve made since then.